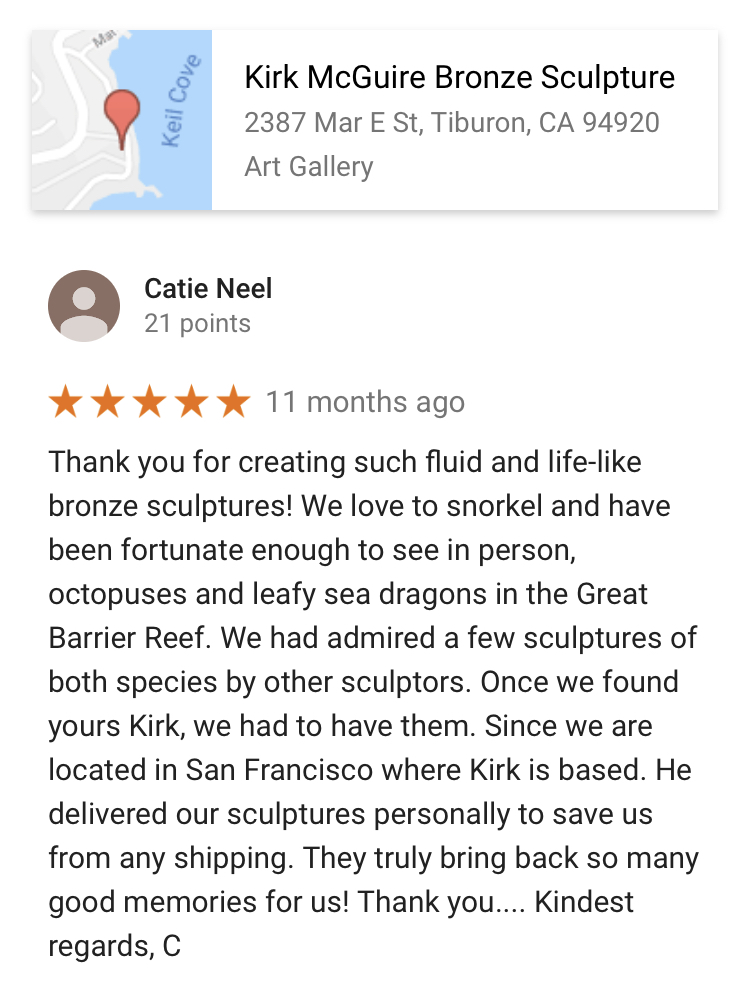 Scott Cassell, Explorer & Filmmaker
Known explorer, underwater filmmaker.
Scott Cassell
Known explorer, underwater filmmaker. Pictured with a Humboldt Squid.  Appearing on the Discovery Channel, and various other networks.
"You are a gifted artist with an eye for reality and proper morphology."
Documentaries:
Disney Channel, BBC, History Channel, Discovery Channel, Animal Planet, Space Channel, Spike TV, MTV (Wildboyz). World record for longest distance traveled by a diver.
Undersea Voyager Project
Kirk McGuire Bronze Sculpture
Jim Harris, Triton Submarine Pilot
Piloted Triton 3300/3 sub that filmed world's first giant squid.
"I love your sculptures! Especially the Giant Squid! I am the pilot who drove the Triton submersible for Dr. Kubodera and Magic Man Sugita on our dive where we filmed the Giant Squid off Chi Chi Jima, Japan. I also had the pleasure to pilot dives on that trip for Dr. Steve O'Shea and Dr. Edie Widder.  It was a good trip. When I saw your sculpture of the Giant Squid I said "that guy has got it!" Now.... how am I gonna add one to my
G-Squid collection?
Keep up the good work."
Documentaries:
Discovery Channel show 'Curiosity'.
Known for piloting a Triton Submarine to 3000 feet to find a giant squid! Shown on the Discovery Channel show Curiosity, the world got its first look at one of the most elusive and mysterious creatures on the planet the giant squid. Jim shown here with scale model of the triton sub, and  Kirk McGuire's 'Legend' table.
Jim Harris
Pilot Triton Submarines LLC
1 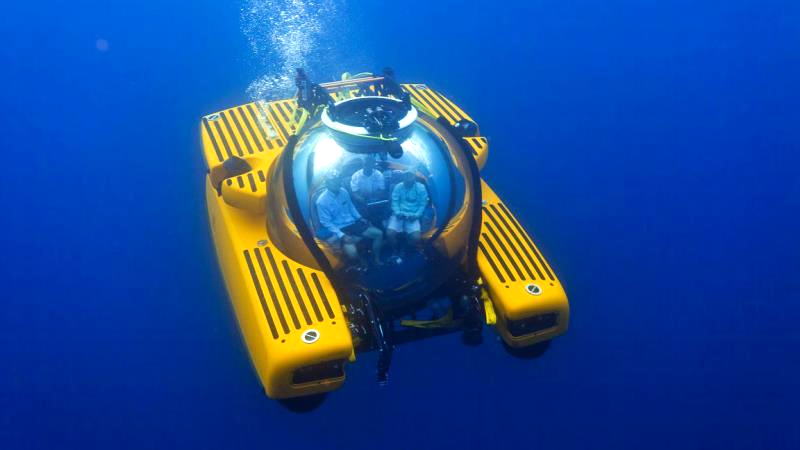 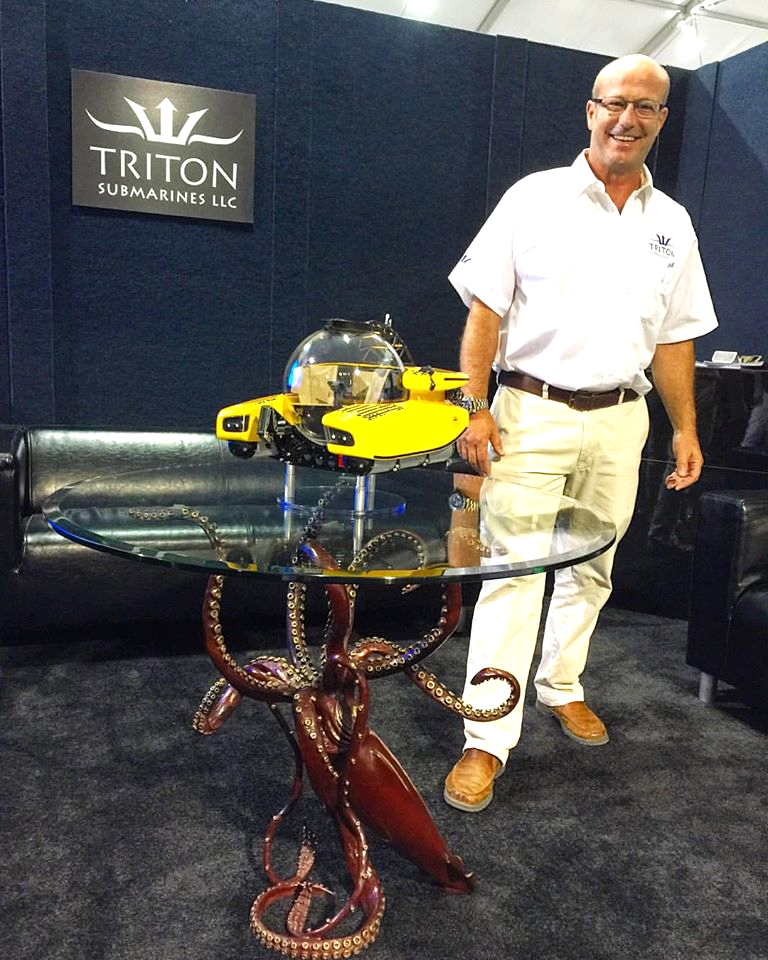 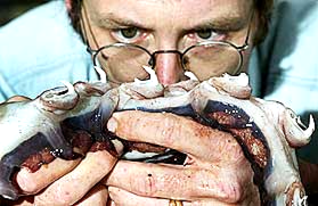 Tom, Marine Biologist from Jackson, FL
Marine Biologist
"I have seen live leafy sea dragons. Anyone that can make ... something so lithe, and feathery made out of metal is the work of a magician - not an artist. The balance (standing) is also stable despite such a high center of gravity.... There is great perception and science behind Kirk's art - truly amazing."
Tom is a 30 year career marine biologist, research diver and has been lucky enough to have his hands on a number of rare marine species including a giant squid in 1994, and a translucent blanket octopus in 2008.
Purchase of 'Leafy' bronze from
our Etsy store account.
2016, 5 out of 5 stars
Tom Jackson
Marine Biologist 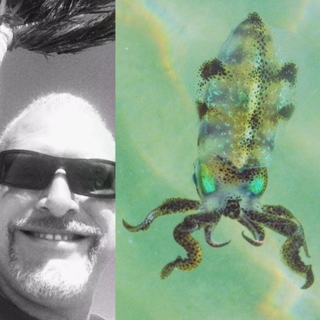 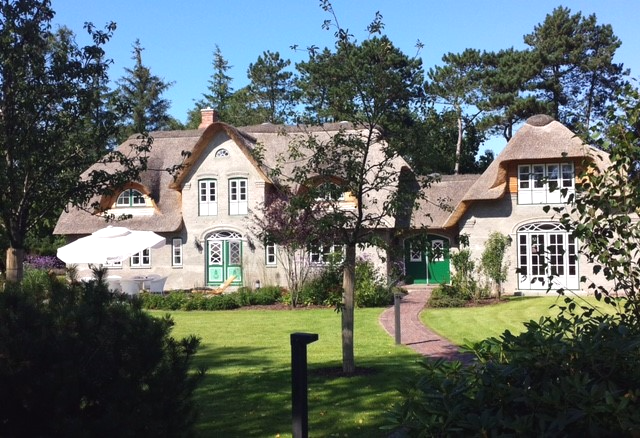 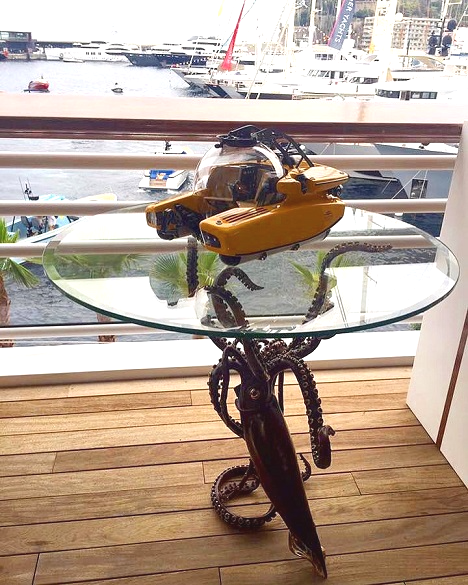 "Hi Kirk,
Thank-you!!!
We received the certificate yesterday.
Here she is in a beautiful spot by our pool in Australia... not her permanent home but definitely one that does her beauty justice! We actually keep her on a beautiful glass topped, New Guinea rosewood coffee table where we admire her every night. Thank-you for being an artist of meticulous standards. We hope to engage your talents
in the future!" Kindest regards
2018, Gem & Dr. Rob Schreiber Australia
Dr. Rob Schreiber & Wife Gem, Australia
Dr. Schreiber is a Surgeon in Queensland, Australia.
He and his wife Gem purchased a 'Leafy' while vacationing in
San Francisco.
Sitemap
Triton Submarines, Monaco
'Legend' with Triton Luxury Submarines LLC at the 2016, Monaco Yacht Show.
"During this year's Monaco Yacht Show, Triton had a strong presence at the prestigious Monaco Yacht Club. The 3300/3 model was on display accompanied by a specially designed bronze squid table in memory of the first giant squid to ever be filmed by Triton." 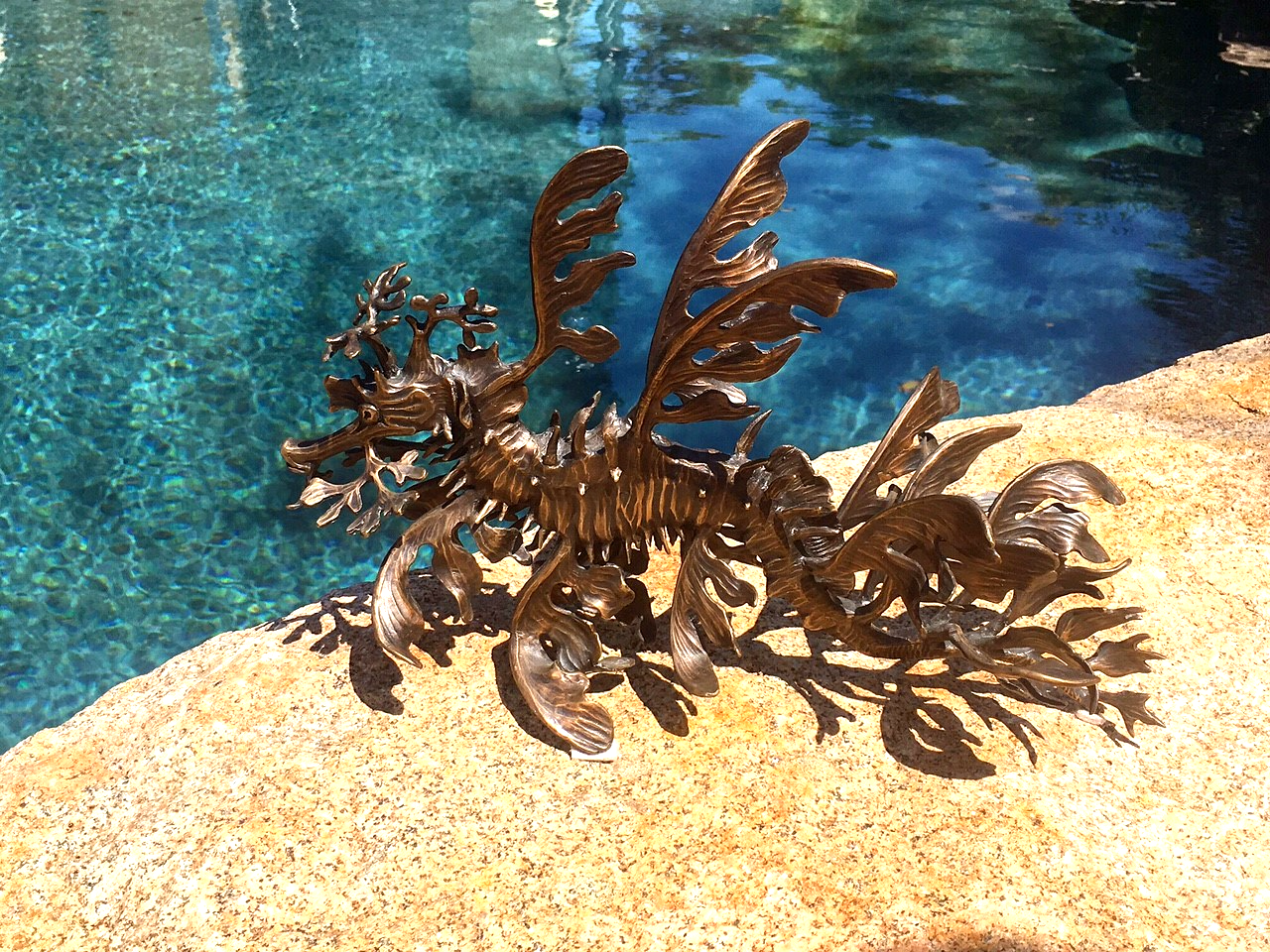 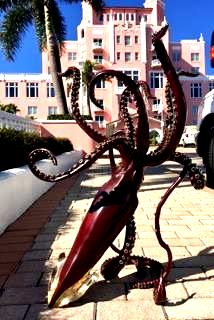 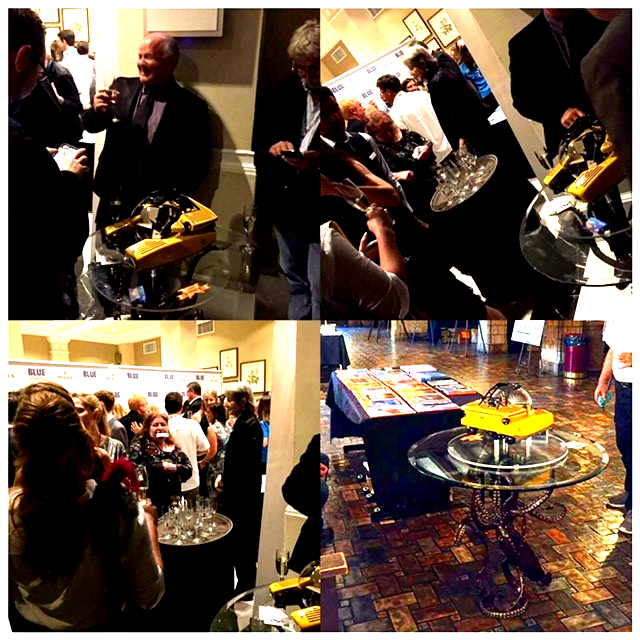 2016 Triton Submarines, LLC. VIP Gala, Blue Ocean Film Festival
'Legend' with Triton Luxury Submarines LLC at the 2016 VIP Gala.
"Triton Submarines LLC brought our edition of Kirk's 'Legend' table to yet another amazing event! The Blue Ocean Film Festival & Conservation Summit. As well a Premiere of Leonardo DiCaprio's 'Before The Flood', at the Palladium Theater."
Jim Harris
Pilot Triton Submarines LLC
Brooke Mackay, Developer from Cornwall, UK
London Land Developer, Cornwall
purchase of 'Cephalopod' table from
our Etsy store account.
2016, 5 out of 5 stars​
"Fantastic item, very friendly seller, who kept me informed throughout the build process. Would definitely use again for another project in the future." 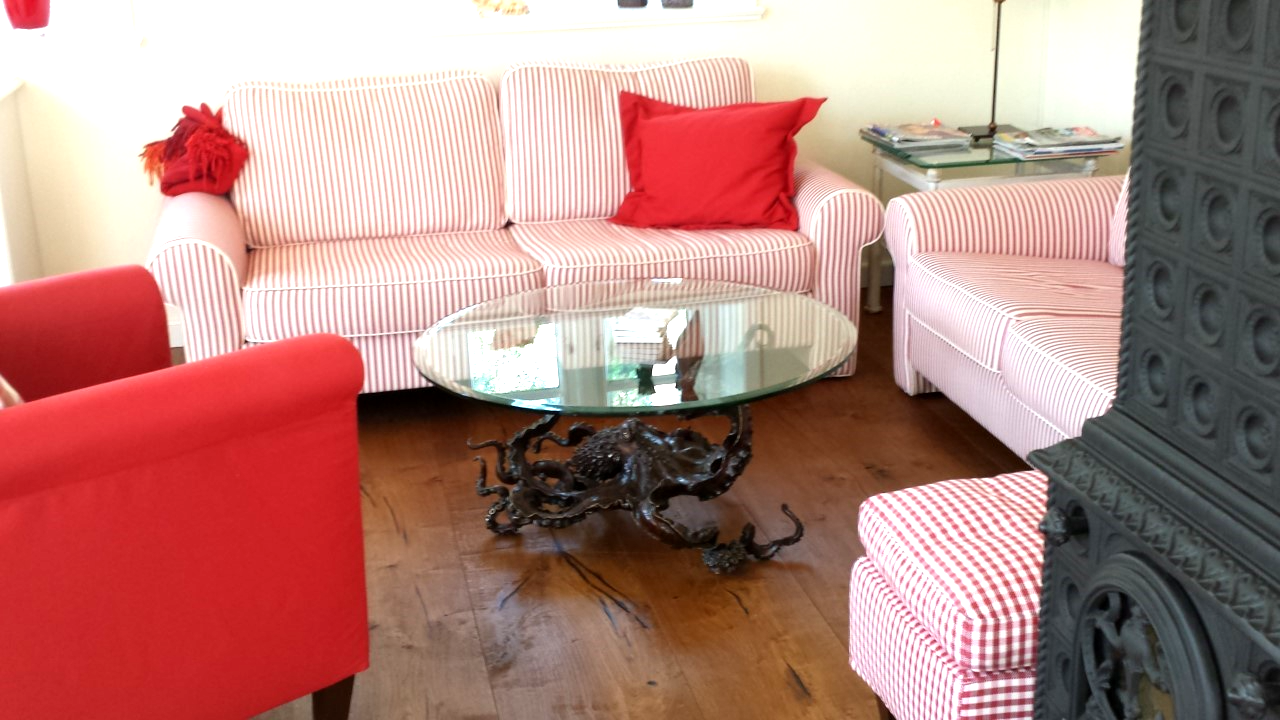 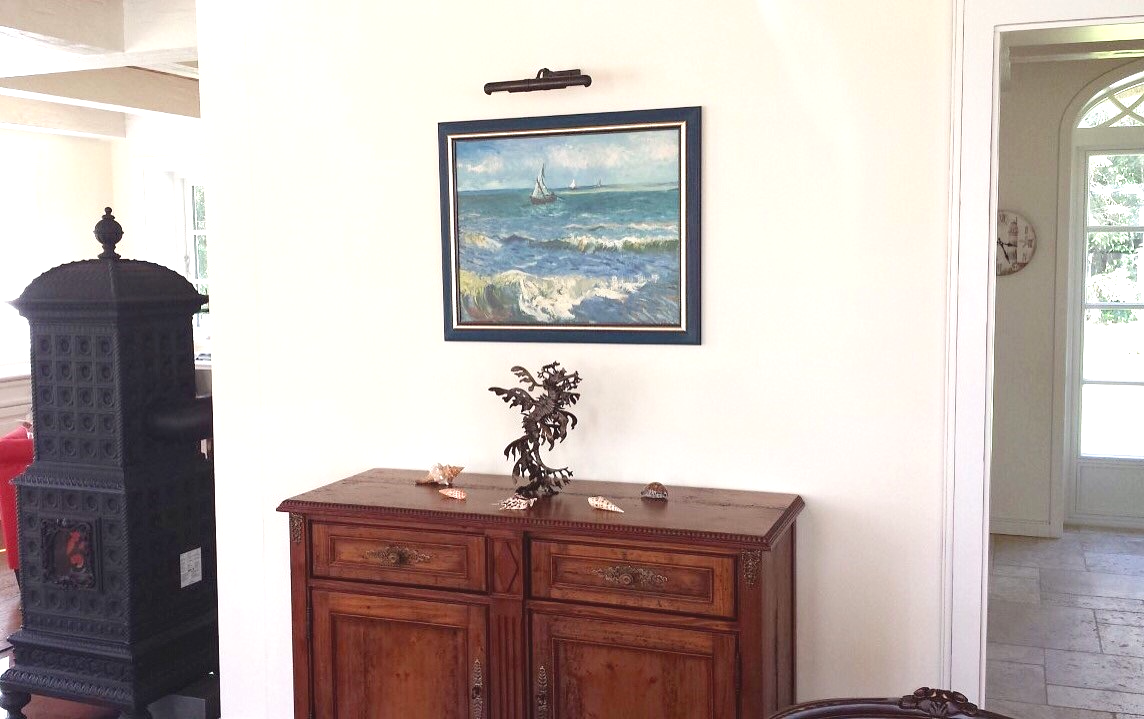 Collector, Sabine Buske & Family. Island home, North Seas coast from Germany
"Dear Kirk, some minutes ago, the leafy sea dragon, and octopus table arrived in my home (see the attached picture) Thanks a lot, it is wonderful. I love it!!! It will get a place in the middle of the new house and we will love it for years."
"As I promised I sent you some photos about the new home of your treasures. The house stands (as I told you) on the small island Amrum in Friesland with a varied past with seafaring and whale hunting in the arctic sea. We built the house as an ancient model, but the old houses
(there are lots of them on the island) are lower with small windows
(I send you a picture of an old house, too) The house will be painted white next spring…
The octopus table arrived well this morning. Really marvelous!!!!!!!!!!!!! New home of your two wonderful works of art; it is on an island in the north sea in a rough area and the sea is nearby. Thanks a lot!
Have a good time, stay healthy and best regards..."
Purchase of 'Cephalopod' table, and 'Leafy' bronzes.
2015, Sabine Buske & Family, Germany

Metal Arts Guild San Francisco
Kelly Nedderman, President
That piece is really beautiful!
Kirk's sculpture of a leafy sea dragon; 'Leafy' was requested by the Guild President. It is featured in their 2018 brochure.
Kelly Nedderman President
www.metalartsguildsf.org
Ron, from FL
Purchase of 'Epic' bronze from
our Etsy store account.
2020, 5 out of five stars
"The Whale & Squid bronze sculpture 'Epic' is truly awesome and magnificent, intricately detailed, and created with impeccable precision. The artistry is outstanding, extraordinary, and unsurpassed. The packing of the sculpture was extremely well done and very professional, and the sculpture was promptly shipped and arrived safely in perfect condition. There is clearly no doubt that this artist takes much pride in his lifework, demonstrates an exemplary work ethic, and is extremely passionate about his craft. I am delighted to own such a pristine and museum-quality bronze sculpture that so nicely complements the other bronze sculptures I already have in my collection. If I decide to purchase another exquisite bronze sculpture in the future, I will surely get in contact with this artist again without hesitation." 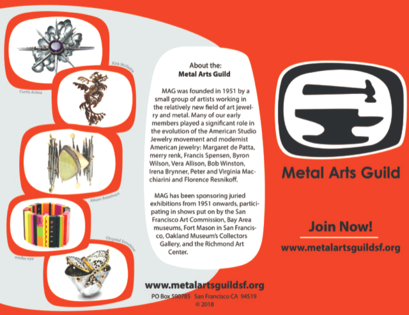 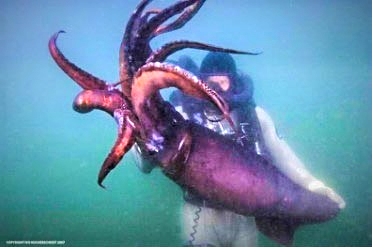 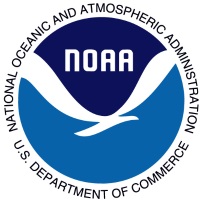 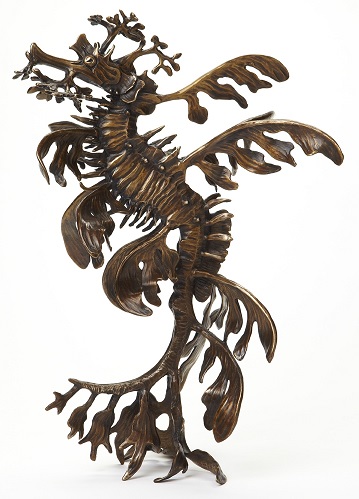 Susan Shannon, Google
Executive from, CA
Purchase of 'Leafy' bronze from our Etsy store account.
2014, 5 out of five stars
"Beautiful piece. Fast shipping. Great Communication."
"Kirk McGuire creates museum-quality art sculptures and sculpture tables. First, he sculpts the originals, molds them, and pours waxes from each mold. After the wax work, he delivers them to a foundry in Monterey where they cast each piece. Once he picks it up and finishes the process, your art piece is ready to wow! Often inspired by the ocean, his pieces are ideal for luxe, modern and beach-themed interiors, but merge well in any environment. Check out his Etsy shop and his website for more information." 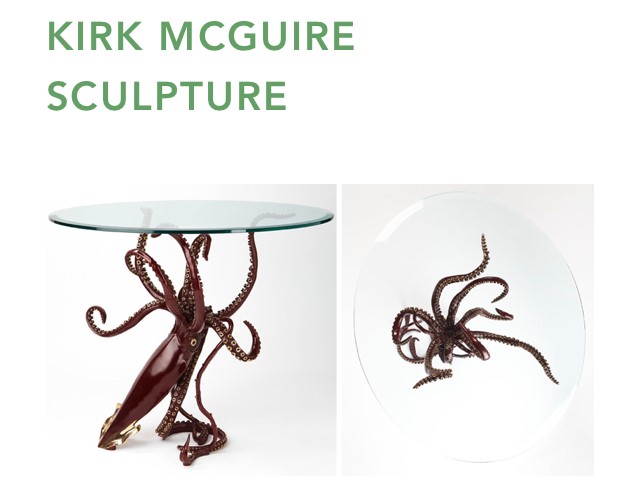 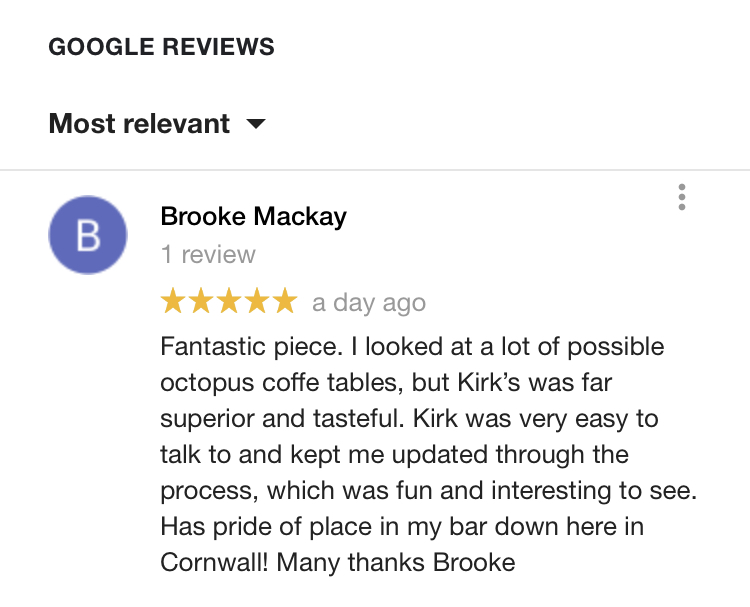 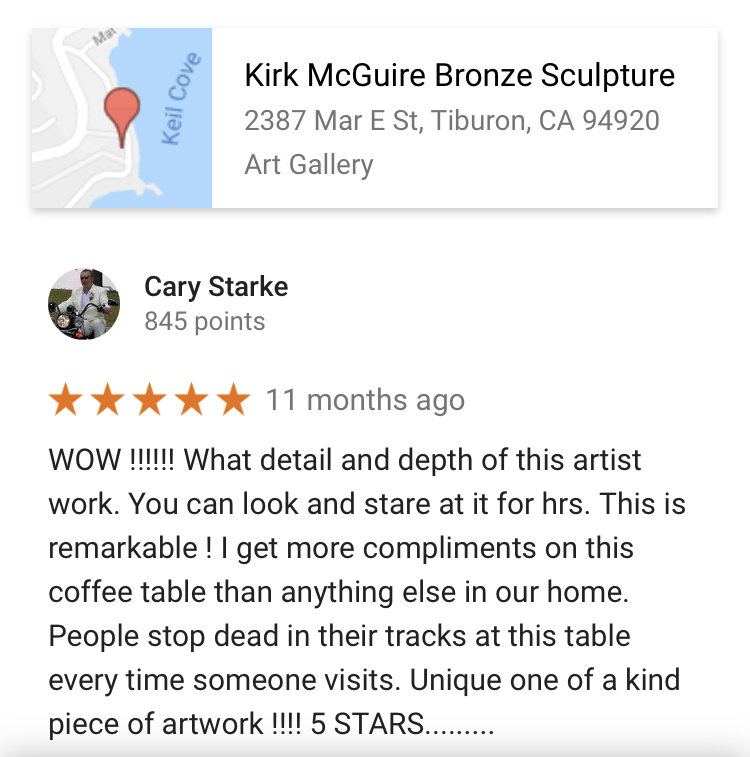 Mark, from Switzerland
Purchase of 'Leafy' bronze from
our Etsy store account.
2021, 5 out of 5 stars
"Fantastic service. Quick responses to messages with regular updates.
Already considering next piece."
Thanks again Kirk 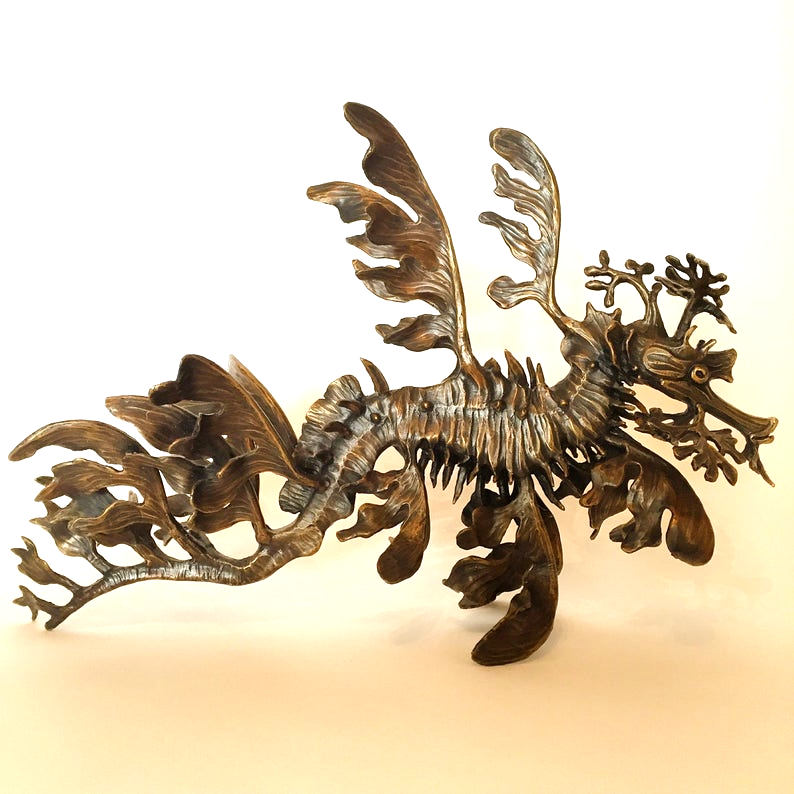 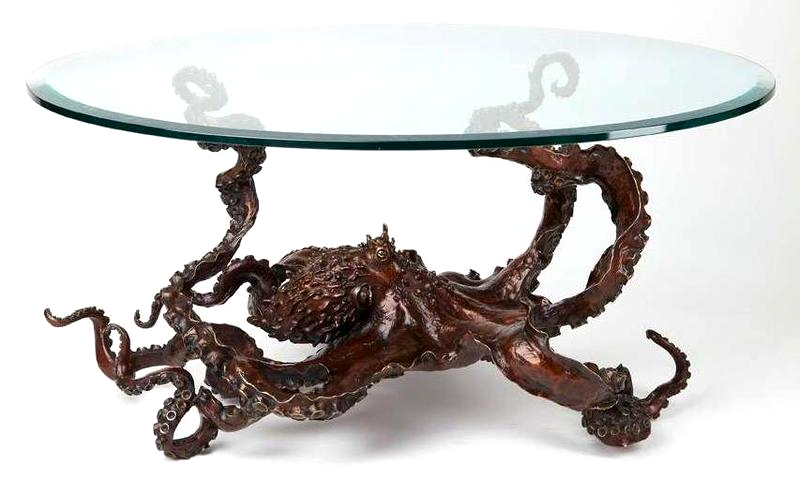 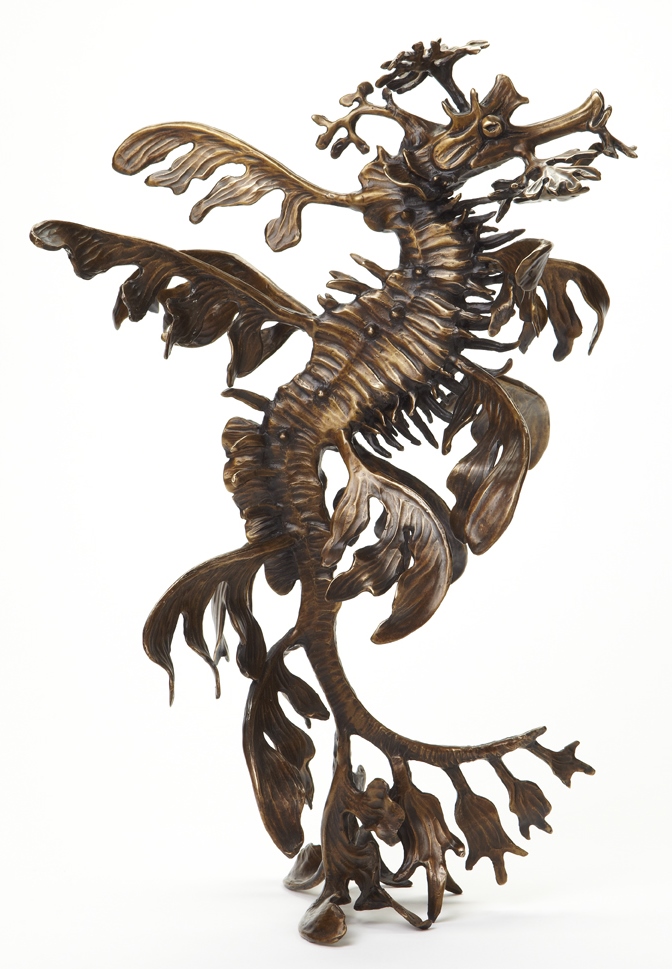 Shannon, from FL
Purchase of 'Leafy' bronze from our our Etsy store account.
2021, 5 out of five stars
"The leafy sea dragon is truly a lovely and exquisitely detailed piece and arrives exactly as ordered. Kirk was very involved in the entire process and made the experience stress free. I'm very happy with this purchase!" 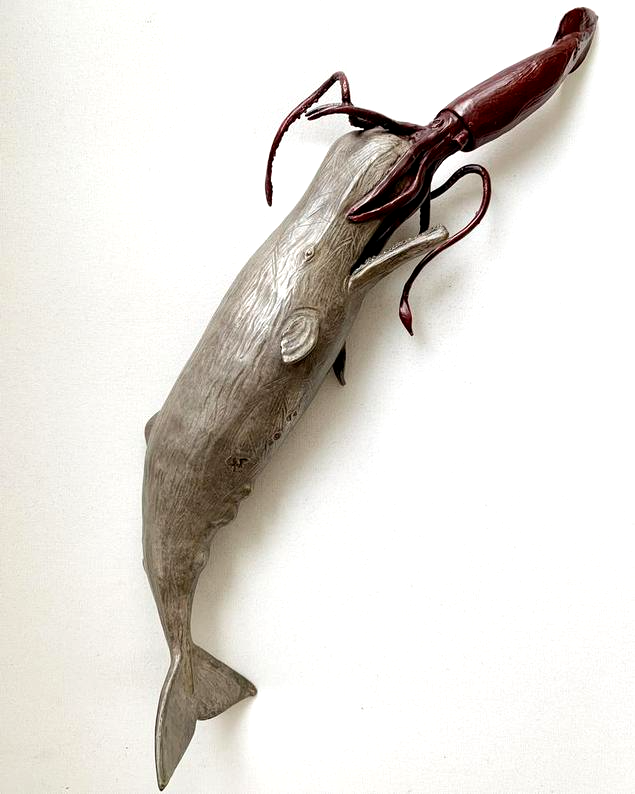 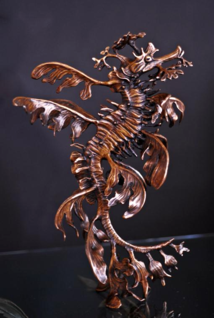 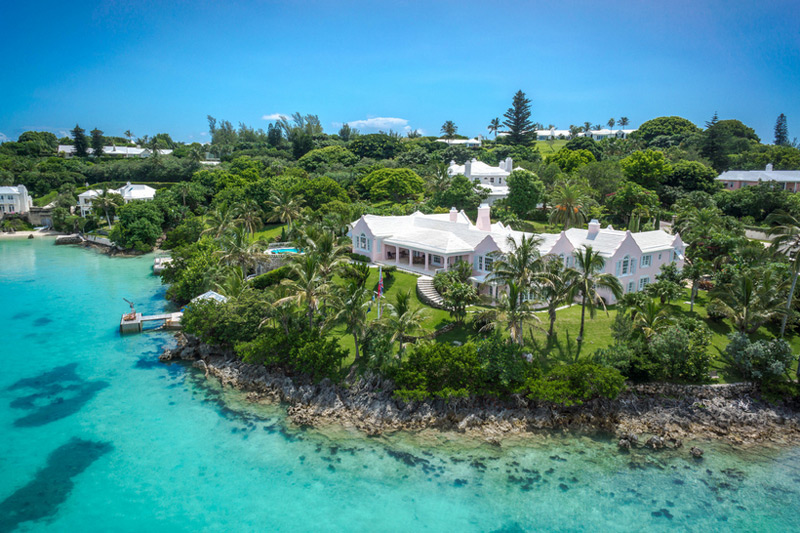 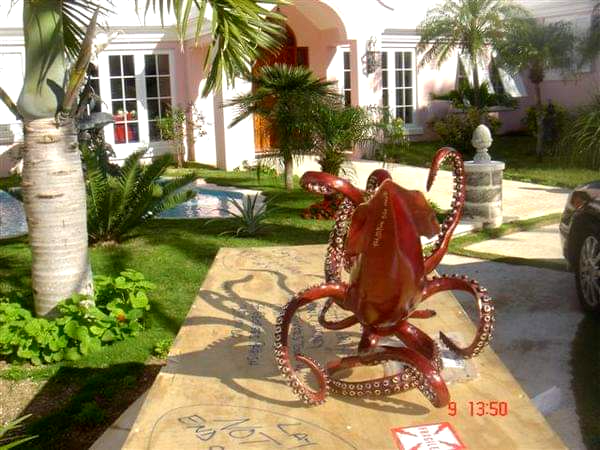 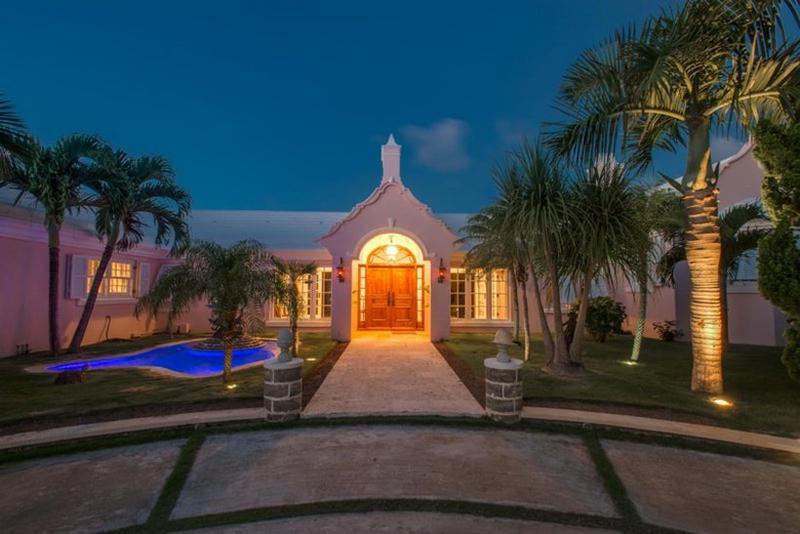 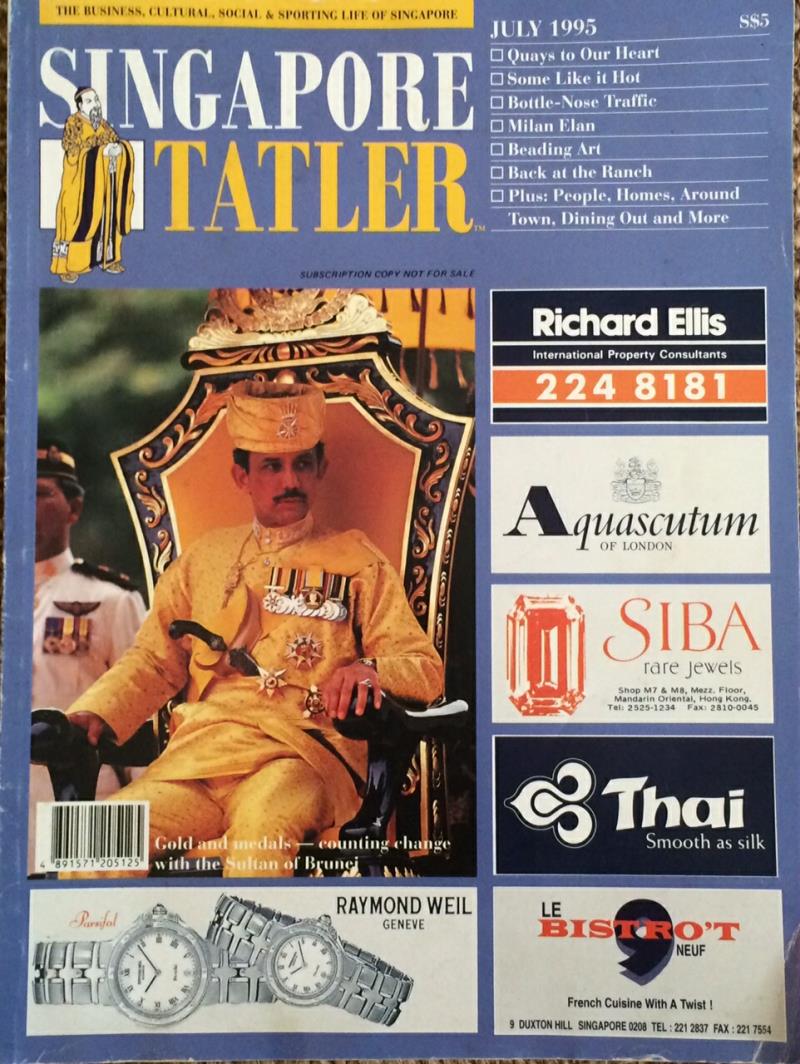